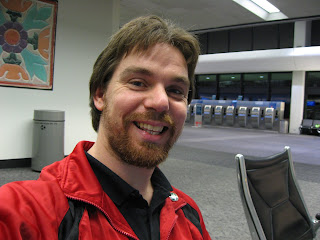 Last night I was reprimanded by a security officer at the San Francisco International Airport for a serious infraction: standing too close to a passenger exit portal while trying to catch one last glimpse of my beloved wife heading to her gate.

It is important to mention that moments prior to MY incident, Saki herself spent a few minutes in secondary inspection, where the NSA personnel looked through her bags, x-ray scanning one of them in particular 3 times.  “I told her that smearing plutonium powder on her zipper to keep mosquito larvae from collecting in her makeup box was a bad idea!”  Ok.  I DIDN’T tell her that!  But now that I used the “P” word, I’m sure a warning has been triggered, sending THIS post to secondary FBI protocol bots, so let’s have fun with it!

When the melodramatic bag debacle ended the over-ambicious, pseudo-authoritative figures released the innocuous prisoner from their public display of overprotective placebo-security claws.  We, Saki and I, proceeded to exchange loving gestures that were sure to excite the gag reflexes of the toughest middle-schoolers: blowing kisses; mouthing ‘I love you’ and other sweet nothings; waving frantically while tilting our bodies uncomfortably, stretching the torso, neck and arm to stay in view of one another, over and around the obstacles standing between us, etc, etc.

“You have to back away some, Sir,” said the man, sternly.  “You can view from the balcony,” he continued while pointing to the platform just behind me, half-flight of stairs above my head.  “Bummer,” I thought.

“Oh, well, can’t see her anymore anyways” I mumbled the words, in valiant defiance, yet soft enough not to be heard by the authoritative figure in the blue and gray uniform.

I turned confidently and walked away with my head held high.  A few steps and I was out of the security area and on my way down to an underpass, allowing my shoulders to droop a bit.  Next, my eyes involuntarily sunk and the my field of vision reduced from wide angle beyond the horizon to just a narrow passage mere inches in front of my toes.

The last shimmer of chivalry were in my thoughts: “I should have said ‘My reason for living just walked down that hallway and all you can do is…’ no, no… that would be interpreted as desperate and they could hold me up for real” — I know, I know.  It was a figment of my imagination, but I wasn’t ACTUALLY wanting to be arrested… not even in my daydreaming — chicken!

So I tried again, this time my imagination more assertive, but less deranged-sounding, I thought.  The narrative continued: “I would hold my ground, look the guard straight in his eyes and say: ‘I am going to stand here for 16 seconds and watch the love of my life walk down that pathway.  She will get into a tin can and fly thousands of miles away and I won’t see her for MONTHS.’  That’s it, stress the right words and play the heart strings card!”

Side note: did I mention these thoughts were ACTUALLY happening!?!  The speaker and the narrator BOTH have speaking lines in the play that’s taking place in this here noggin’!

“And after a perfectly calculated pause I would continue: ‘…and if you are truly that heartless, then call for backup and have me dragged from here!’  Yeah!  I’m kicking psychological ass now!”

Soon, of course, I reached the elevator to go up to the 3rd floor.  When reaching section F28 of the garage where my car was parked, I could still feel the effects of low levels of adrenaline pumping though my veins.  “Yeah… kicking ass! Whatever!  YOU’re an ass!  God, I miss her already.”